What is vape?, is vaping safe? we have asked this question many times when we heard about vaping, the trend that has taken the States by a surge of popularity. Vaping has become so casual that even some of the most well-known celebrities like Charlie Sheen and Lindsay Lohan have been seen vaping lately. But people don’t talk much about it and aren’t really sure if vaping is safe. So, what is vaping? What is in a vape and is it safe? Let’s all get a little more educated on the topic.

Vape is created by the machines people can buy called either Mods or Pods. These devices all perform the same task, even if some devices do it better or faster. All mods and pods heat up the liquid used for vaping that sits in the tanks or cartridges of the device, and in turn create a vape cloud when the users inhale and exhale from the device’s mouthpiece. Now this brings about the question of what is in the liquid (which is also called e-juice) and is it safe for humans to inhale?

Now there has been plenty of speculation, mainly because people have not been well informed about e-juices, like gorilla warfare ejuice, and have jumped to their own conclusions and assumptions. There have been plenty of doctors and researchers who have actually looked into the topic of vaping and the effects it has on humans. This is what they’ve found. 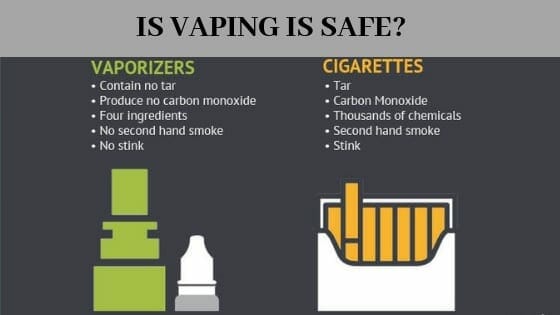 So, now that we have taken a look at all of the facts found behind vaping and its content, hopefully you can feel more knowledgeable and confident in your opinion on vaping. There is one major thing to consider on top of all of these things though, and that is that vaping is as safe as you make it.

You have full control over your habits, and using an e-cigarette is no different. Everything has a potential to be harmful to you, even eating too much. So is vaping safe? Looking at it in a black and white scenario, no, inhaling any substance into your lungs is not safe for you. But can it be very close to safe and can you vape in a way that causes you minimal damage? Yes, you just have be aware of the ways to go about